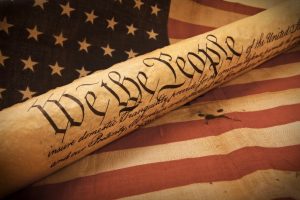 The constitutional right to bail offered by the Eighth Amendment in the U.S. is for the protection against excessively high amounts set by the courts. This does not mean that you always have a constitutional right to be given a chance at bonding out of jail if you pose a substantial risk or if you are facing very serious charges. It simply means that the judge cannot put your bail amount higher than what is reasonable to ensure your return to face your charges.

Eighth Amendment and the Bill of Rights

The Bill of Rights consists of the first ten amendments to the United States Constitution. Number eight of these amendments refer to the rights of defendants against the following:

While these provisions were originally intended for the federal government, the Supreme Court has determined that state governments may not implement cruel and unusual punishment either. These provisions were put in place to prevent excessive hardship to those who are accused of committing crimes.

English Influence for the Eighth Amendment

The three protections offered by this constitutional amendment are not unique to the U.S. but are practically copied from a Bill of Rights provided in England in 1689, over one hundred years earlier. The English Amendment was meant to prevent arbitrary punishments from being handed out to defendants by judges and focused on the use of precedent in order to help the punishment fit the crime. Proponents for the amendment to the U.S. Constitution wanted these restrictions to be applied to Congress as well in order to reduce the potential for abuse of power.

In the Supreme Court case of Stack v. Boyle, twelve defendants from the Communist party were held under extremely high amounts of bail. Exercising their constitutional rights, they filed to the Supreme Court to hear their case. The Court determined that the amount was indeed set much higher than necessary and that the amount should not be set at “a figure higher than is reasonably calculated” to make sure that the defendant shows up for trial. The Supreme Court did make note that there might be times that a judge may set an exceptionally high amount of bail if it can be shown that there is justification in that specific case.

This right to bail is more of a right against an excessive amount being applied. In fact, the Bail Reform Act was passed in 1966 to further allow for the reduced financial strain on defendants of crimes. While this helped to alleviate some of the financial burdens before trial, there was no differentiation between low-risk and high-risk inmates. The Bail Reform Act of 1984 made these matters more clear, allowing the court to detain or release an accused individual based on the “perceived evil” that person posed to the community.

How expensive is a Nevada Bail Bond?

The state of Nevada determines the cost of a bond at (15%) of the amount that the judge decides. This means that you would pay a bail bondsman in Las Vegas (15%) of your set bail. If the judge determines that you would have to pay $10,000 to get out of jail, you can pay a qualified bail bondsman just (15%) of that amount, or $1,500. This may not be cheap, but it sure is less expensive than paying the full amount all at once.

If you could use the help of a trustworthy bondsman in Las Vegas, turn to Marc Gabriel and eBAIL Cheap Bail Bonds Las Vegas. We take payments over the phone, online, or in person. After we receive the money, we will go and pay the full amount to the jail to secure the release of your loved one. If you cannot afford to pay the (15%), we can work with you to establish a payment plan.

Next post: A Review of Failed Bail Reform: An Analysis of States